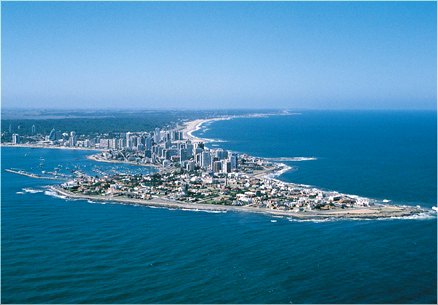 Punta del Este is a beautiful resort town on Uruguay’s coast and only 140km from the country’s largest city, Montevideo. Although the summer season can bring a substantial tourist boom, things quiet down significantly the rest of the year, making for the perfect expat escape.

Uruguay is rapidly becoming a beacon for expats in South America. The cost of living and land is still cheap, and just look at that picture– Uruguay’s coast is breathtaking, and it boasts some of the best beaches on the continent. Food can cost about half of what it does in North America, even within Montevideo.

Furthermore, Montevideo offers the highest quality of life of any major city in Latin America, according to Latin American sources. It only gets better in idyllic Punta del Este, where residents only know the good life.

The city’s population is predominantly of European descent, mostly of Spanish and Italian lineage, so life within the city is reminiscent of parts of Europe. Nautical sports and fishing are popular activities, and inland the architecture has a healthy mix of colonial and modern design. Perhaps the city’s biggest perk is that every single beach on its peninsula has public access.

For a great article on moving to Punta del Este, check out this one over at ExpatExchange.