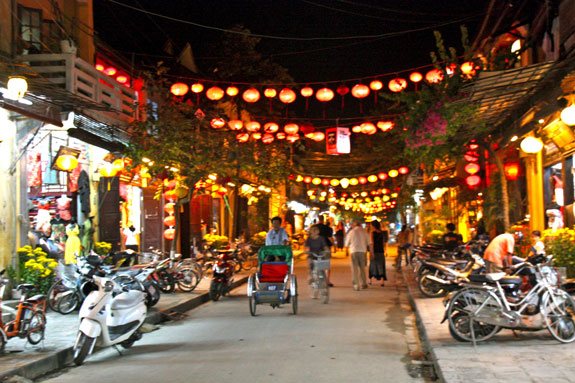 Hoi An is the type of city that most people only realize exists when they start planning their first trip to Vietnam. Up until then you might think it’s just an alternate spelling (or a typo) for the capital city of Hanoi, but in fact, Hoi An is the loveliest city in the country and one of the most charming in all of Asia.

Those who might recognize the name Hoi An probably have heard about it in context of its abundant tailor shops. Indeed, it does have a reputation of being the “new Hong Kong” in that you can actually get a new suit or dress made in a day or two at a fraction of the cost of having it done elsewhere. The tailor shops are one dominant feature of Hoi An, but even those not interested in rolling the dice on custom clothing will love the place.

The vibe in Hoi An

There is a bit of a controversy here in that it seems like 80% of visitors adore Hoi An and many of the rest actually hate it. It’s hard to figure out exactly why, but I will give my opinion here. Put simply, those who stay in the old city center can easily get overwhelmed by their surroundings and the somewhat aggressive merchants.

The center of Hoi An is actually the old district that sits next to the river in the southwest corner of town. It was built by Chinese fisherman many centuries ago and it still has a distinctly authentic feel to it. Unlike pretty much anywhere else in Vietnam, Hoi An’s old town feels like being in an amusement park, but it’s a mistake to think this is all a recent recreation of an old village because it’s not. 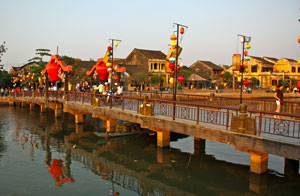 There are Chinese lanterns hanging over several of the main streets, which actually turns the town especially beautiful after dark. Those same streets are lined with tailor shops (several on every block), souvenir shops, and many fine restaurants. In fact, Hoi An is considered Vietnam’s culinary capital too, which only adds to its other appeals.

Being quite a touristy place (which is likely the other reason some people don’t like the city), there are abundant restaurants with English-language menus and comfortable seats, which are both slightly rare in much of Vietnam. The local specialties are a dumpling dish called White Rose and a pork/noodle dish called Cao lầu. Both are excellent and available for US$2 or so per portion, even at fancier places. The local food in Vietnam is good almost everywhere, but it seems to be at its best in Hoi An, with fresh vegetables, herbs, and garnishments included with every dish. The city is also home to the best banh mi sandwich in the world, if Anthony Bourdain and his old boss are to be believed.

All that said, the city of Hoi An is much larger than its old town center, and most of what surrounds the historic part looks just like the rest of Vietnam. Most buildings are new and there are many dozens of affordable and small hotels that are easy walking distance to the historic center. There’s also a very nice beach about 5 kilometers away, and cheap motorbike rentals and usually-free bicycle rentals from hotels make it easy to reach. There are a handful of nice restaurants and bars in that beach section, so sun-worshippers can make a day of it out there and come back in the evening for the pleasant Hoi An atmosphere and the surprisingly good nightlife.

The cost of living in Hoi An

The expat community in Hoi An appears to be rather small, made up mostly of English teachers and workers for a few local NGOs, but it’s very popular with tourists and should be on any Vietnam itinerary. Fortunately, it’s also very cheap, and definitely great value. Hotels in the old town area start at around US$20 per night, and it’s debatable whether they are worth it since you can get a room for about half that price only a few blocks away. In fact, as mentioned up top, staying a bit outside of the old city part seems to help many enjoy the city since they can avoid overdosing on the touristy stuff. There are many nicer hotels with rooms starting around US$50 a night, which is also great value for the 3 or 4-star traveler. Some new large hotels are being put up along the China Beach section along the coast between Hoi An and Danang.

Meals are also excellent value in Hoi An. With the exception of about 5 or 10 white-tablecloth-type places, most restaurants in the city are very cheap. You can easily get a multi-course full meal for under US$5 if you are on a budget, or stuff yourself with the most expensive item on the menu for only a bit more. Restaurants just outside the old-town area tend to be a little cheaper, and many are just as good. One place called Cafe 43 is one of the highest rated in the city and it’s also one of the cheapest.

Those who like “fresh beer” (bia hoi) will love Hoi An as well since it’s offered for around US$0.15 a glass, even at many of the fancier places. It costs the restaurants almost nothing per keg and they realize that offering a very low price on a sigh outside will bring people in to spend US$4 or more per person. Other drinks are also cheap, but at least US$1 for most beers and about twice or three times that for cocktails.

One thought on “Monday Escape: Hoi An, Vietnam”