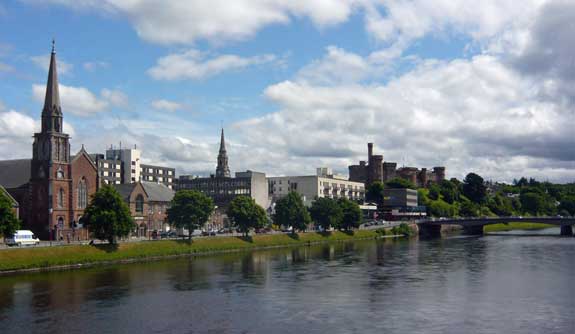 If you like long summer days that may not be all that warm, then it would be hard to beat Inverness, Scotland. It’s considered the UK’s northernmost city, although with only about 50,000 inhabitants it feels as much like a town than a city. And among other things, during June and July, the sun is up from about 3am until 10:30pm, so for many residents it may as well be the Arctic Circle.

Another notable thing about Inverness is that it’s considered the Capital of the Scottish Highlands, even though it’s only technically on the edge of that geographical area. Still, if you want to explore the Highlands there is no better place to base yourself, and few other choices anyway.

The vibe in Inverness

The city center of Inverness is well under one square kilometer so you can walk from one edge to another in about 10 minutes, and if you have 2 or 3 hours to kill you could literally walk every street and alley in the main town. That may be too small for some people, but since Inverness is the largest city in the area, it seems to have all the conveniences, including a modest shopping mall right next to the train station.

The River Ness runs swiftly through the city, with the area north of the river being more residential while south of the river is the commercial center. A couple of foot bridges make crossing it easy and calm, with only a few streets that seem to have much auto traffic anyway.

The Inverness Castle, which looks older but was built in the late 19th Century, dominates the skyline, but there are a few cathedrals and other historic buildings that remind you that you are in a historic European city. The town is packed with pubs and restaurants that range from trendy to traditional, so visitors or residents always have a wide variety available, which can’t be said of many other towns of this size.

Just south of Inverness is the world famous Loch Ness, which after having taken a short cruise on the lake, is clearly popular because of marketing rather than beauty. Obviously the legend of the Loch Ness Monster dominates the reasons why anyone cares about this body of water, and the area cleverly exploits it with tours and visitors’ centers. The lake itself is incredibly deep, but on the surface it looks very plain and very dark, so without the “monster” there’s no way people would line up to look at the thing.

The Scottish Highlands themselves are another matter. Everything north and mostly west of Inverness is the Highlands, and this is some of the greenest and most lush scenery you’ll find anywhere in the world. Unlike, say, the Yorkshire Dales, the Highlands look more like rugged mountains except that almost every inch of them is green. Whether you tour with rented car or on one of the few train journeys or as part of a guided coach trip, seeing the Highlands will be something you won’t soon forget.

Prices of things in Inverness

For anyone used to London prices, Inverness will be cheap. Hotels are a bit tricky because with the exception of a couple of hostels, there are no cheap beds at all. In high season you’ll find the bed and breakfasts start at around £50 per night for a single, and around £65 per night for a double. Quality is high, it seems, and there are a few larger chain hotels in the city center for those who prefer that experience, with prices only a little higher.

Food and drinks can be bargains in Inverness, with many restaurants showing promotional deals on signboards out front, although there is plenty of high end dining as well. A lunch or dinner at a sit down place will start at around £5, but £10 is more common. There are McDonald’s and Subway sandwiches around for those on even tighter budgets.

A pint of beer at a pub in Inverness will start at around £2.25 at the cheaper places but usually over £3 at more typical pubs. This is on the cheap side for the UK, and other drinks also tend to be a bit on the cheaper side here.