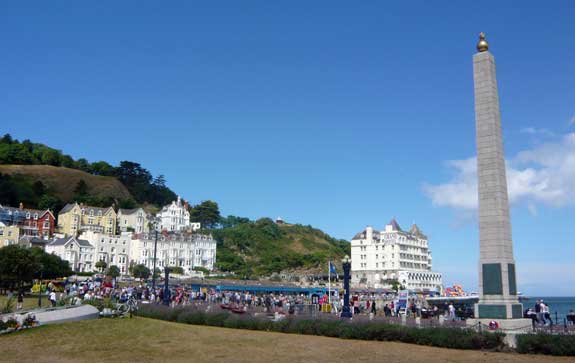 Beach resort towns tend to be internationally famous because so many people are willing to travel long distances to visit them. Many exceptions, however, are in northern Europe, where good beach resort weather is rare enough that no one in their right mind would come from another country. Britain has quite a few beach towns that are popular with British people only, and Llandudno in Wales is among the nicest and most worthwhile.

Along Wales’ north coast, not too far west of Liverpool, Llandudno has been a prime destination for the middle and upper classes in Britain for many decades, though with the discount airlines to compete with, its best days are likely behind it. Still, it’s worth a look for tourists as a glimpse back in time to see what holidaymakers would do when their choices were far more limited.

The vibe in Llandudno

With a long beach overlooking a lovely bay, Llandudno’s sea front is completely lined with hotels. They are all painted in muted pastels so as not to distract from the scenery or compete with each other for attention, so it feels like a destination for the upper class, in contrast to working-class Blackpool not too far away.

The beach itself leaves something to be desired, as only one small section is sandy while the rest of it is covered in stones. Still, the views looking out are gorgeous, with a very long pier and a well adorned hill on the western edge. The pier itself goes out nearly half a mile, with bars and restaurants near the end and a variety of amusements near the base end. Like the rest of the town, it’s kept spotless and well maintained, so it doesn’t show its age at all.

The road behind the beach road is the retail center of action, with a wide variety of shops, restaurants, and bars to choose from. The main section is only about 5 blocks long, so visitors can get a look at all the choices in a 15-minute stroll.

The beach itself is pleasant enough, but the area has a few other notable attractions, including the Great Orme hill offering amazing views of the town and the coastal area in general. There is a funicular-style tram as well as a sky lift to reach the peak, although if you enjoy walking up hills you can get there easily on foot as well.

The other notable attraction is the nearby town of Conwy, which has the ruins of a castle and nearly intact town walls that date back to the 13th Century. Conwy also has a picturesque harbour which is popular with locals for a summer stroll. The whole town is like a little storybook village, and one major attraction is the smallest house in Britain, where for a few pounds you can go inside to see that it’s a residence literally the size of a closet.

While the area might not have reliable enough weather for foreigners to want to fly in for a beach holiday, it’s certainly an interesting place to stop while in Britain and especially in the summer. It’s tourist oriented but not nearly as cheesy as several other seaside resort towns on the island.

Prices of things in Llandudno

This might have been quite an expensive town in decades past, but these days it’s moderatately priced, even in high season. With so many hotel rooms for a relatively small number of visitors, you can get a lot of quality without spending a fortune. A hotel room here starts at around £40 a couple blocks from the sea, and more like double that at the proper hotels overlooking the water.

The restaurants and bars also have prices typical of Wales rather than a fancy resort, as you can get a traditional fish and chips meal for £5 or even less if you shop around a bit. A typical meal might cost £8 to £10 in the nicer places, but there are plenty of chain restaurants around with even lower prices.

Drinks are also modestly priced for a resort town, with pints of beer starting under £3 and wine at about the same level. The lovely Wetherspoon’s pub has even lower prices along with food specials that are typically shocking if you buy a drink along with them.