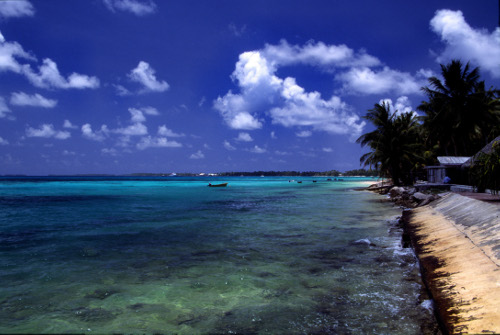 Tuvalu ranked highly on our list of the 10 best places to live for escaping world conflict, and we think it’s also a great place to escape to whether its Monday or any other day of the week.

The tiny nation of islands and atolls in the South Pacific boasts a meager population of just around 12,000 people, making it the third least populated nation in the world, behind only Vatican City and Nauru.

Funafuti is the nation’s capital and its most populated atoll, with around 4,500 residents. The atoll itself is a narrow sweep of land between 20 and 400 metres wide, encircling a large lagoon 18 km long and 14 km wide, with 275 sq km—by far the largest lagoon in Tuvalu. The land area of the 33 islets aggregates to 2.4 sq km, less than one percent of the total area of the atoll.

If you’re a fan of peace and quiet, this is clearly the place to be. It’s also somewhere that you can go to enjoy the simple life. There is an airstrip, hotel (Vaiaku Langi Hotel), and administrative buildings, as well as homes, constructed both in the traditional manner, out of palm fronds, and more recently out of cement blocks.

The most prominent building on Funafuti atoll is the Church of Tuvalu. Other sites of interest are the remains of United States aircraft that crashed on Funafuti during World War II, when the airstrip was used by the U.S. forces to defend the Gilbert Islands and the Marshall Islands.

In June 1996, the Funafuti Marine Conservation Area was established along the western rim of the reef, encompassing six islets. It has an area of 33 km², containing 20 percent of the reef area of Funafuti. So if you’re a fan of diving and snorkeling, you’ve landed in the perfect place moving to Tuvalu.

Tuvalu maintains close relations with Fiji, New Zealand, Australia and the United Kingdom, as well as with the United States, so an expat from one of these locations may consider Tuvalu as a top destination, if it suits their fancy. The island nation’s nearest neighbors are Kiribati, Samoa and Fiji.

Usually when people say they want to ‘get away’ they mean it as a cliche, but for those who really want to get away, Tuvalu might be the place for you.